A post by Don Sheu, one of our Startup Row Coordinators

PyCon 2016’s Startup Row got our campaign on the road on March 9th in San Francisco, meeting with the local SF Python user group at Yelp headquarters. Six early-stage companies that use Python gave their pitches, competing for an opportunity to exhibit in the PyCon Expo Hall on Startup Row. The roster of candidate startups included Alpaca, Bauxy, Beansprock, Opsulutely, Watt Time, and UtilityAPI.

UtilityAPI won! They convinced the judges that its services for the new energy economy held the most promise, edging out their high quality competitors. Founded by Daniel Roesler and Elena Lucas, UtilityAPI provides easy access to usage data for customers like PG&E, ConEdison, and the Los Angeles Department of Water & Power.

An outstanding panel of judges selected our winner. On the panel were several entrepreneurs with successful exits like Bethanye McKinney Blount, Bebe Chueh, and Leah Culver. Kat Manalac, a partner with Y Combinator, joined the panel, as did currently active founders: Startup Row alumna Christine Spang founder of Nylas, and Jessica Scorpio founder of Getaround. 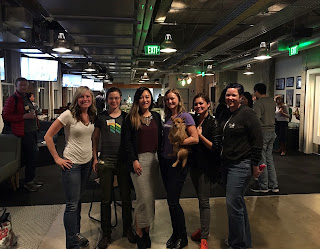 Tonight, March 21st, Startup Row continues its road trip with a visit to Seattle. The local Puget Sound Programming Python meetup and Techstars will meet at Startup Hall on the UW campus, Seattle, to select Seattle’s representative to PyCon in Portland. If you’re going to be in Seattle this evening, you can join and be part of the audience!